May 6th is already a date synonymous with the world of athletics, as on that day in 1954, Roger Bannister was the first person to break the 4 minute mile barrier.


But could May 6th 2017 also become such a significant milestone day with the breaking of the 2 hour barrier for the marathon?

If it happens, it will not be recognised as a world record as the use of pacemakers who will step in and out when required and the staging of the event on the Monza Formula One track in Italy, rather than as a race, do not meet IAAF rules.

But, the Nike project Breaking 2 athletes Eliud Kipchoge, Lelisa Desisa and Zerenay Tadese could prove that a sub 2 hour marathon is indeed possible.  To do this they will have to run an average pace of 4.34 per mile. 7 seconds a mile faster than Dennis Kimetto did when he set the current world record of 2hrs 2 minutes 57 seconds.

Another area were IAAF rules may not be met are the Vaporfly Elite shoes that have been developed by Nike as part of the project.  Seemingly a special carbon fibre plate in the soles make the runner 4% more efficient than when wearing Nikes previous fastest marathon shoe.

IAAF rules state that shoes must not offer "any unfair additional assistance, including by the incorporation of any technology which will give the wearer any unfair advantage"

Although interestingly, I read somewhere, after this years London Marathon that Kenenisa Bekele attributed his problems mid race, when he dropped off the pace, to the foot positioning produced by his wearing a pair of the Vapourfly Elite and the resulting blistering of his feet.

Whatever your views are on whether such projects are  the correct way to attack the 2 hour barrier or whether it should be left to natural progression.  It will be interesting to see if a sub 2 hour marathon will be achieved next weekend.
Posted by Alan Dent at 08:00 No comments:

'Exercise is a Social Contagion'

A recent study of how sharing workout data influences people's fitness and achievements has been published.

Studying data over a five year period from over a million runners, researchers concluded that the sharing of personal fitness data over social networks pushed people to run both faster and farther.

Claiming that exercise is a "social contagion" and that including peers into your personal fitness regime is a huge motivator.

Interestingly, they also found that comparing ones own information to that of better runners wasn't as motivational as comparing data with less fit peers.  Possibly showing the need to stay ahead of 'slower' runners to be more motivational than chasing quicker ones?

The study also showed that while men were motivated by both other men and women to exercise harder, women seemed only to be motivated by other women.
Posted by Alan Dent at 08:00 No comments:

A shock to the system

Good Friday was the annual running of the Elswick Relays and I had managed to get myself onto the Vets B team.  The conditions were excellent for racing and I was setting off on first leg. 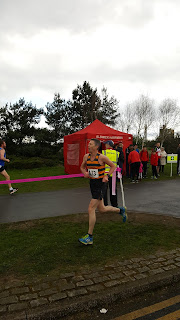 The course is a flat, fast 2.2 miles and having not raced for so long it came as a big shock.  A shock that was not helped by the fact that I missed the start  and ended up trying to play catch-up (not very successfully).  Although I didn't clock it, at least I know my actual running time was faster than the official 14.54.

Despite the mishap of missing the start I still enjoyed the run and it was good to be racing again.
Posted by Alan Dent at 10:23 No comments:

A most diverse sport

Running as a sport, traditionally, has always been diverse in terms of disciplines, with the likes of track, road, cross country and fell running. As a whole these were only pursued by a small minority of the population.

Barriers began to be broken down in the 1970's with the first running boom and the advent of the 'fun run'.  Since then running has become a norm.  Nobody looks twice when they see a lycra clad figure running through the streets or through the woods. This growth in the number of people running has, as well as swelling the ranks of those participating in the traditional areas of the sport, also seen the explosion of a whole range of new events. Such as mud runs, colour runs, sky runs, adventure racing ................ 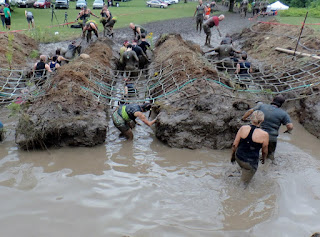 A quick search on Google will turn up a whole host of lists of events such as "11 of the UK's Quirkiest races", "The top 10 fun runs to sign up to in the UK", "The world's coolest themed runs", plus an almost limitless list of more specialist events.

Figures, from America (Running USA) estimated that there were  4 million participants in themed races during 2013. a massive growth considering these types of races / runs barely existed prior to 2010.

Further reports from America (Active.com) show that obstacle races and mud runs were the most popular.  Following a survey of 1200 participants.

These events are fun and add variety to your racing calendar.  I have tried night races and a colour run and  enjoyed  both.

Some of the innovations and ideas are now successfully entering 'main stream' events, such as Highgate Harriers 'Night of the 10,000m PB's' which included pacing assistance, photo finish and chip timing equipment, and a live band. Spectators are able to get up close to the action as after the gun goes the cordon is moved towards the inside lanes giving spectators a unique experience of being close to the competitors, creating an exciting atmosphere for the athletes.
Posted by Alan Dent at 08:00 No comments: