Normally I would incorporate Causey Arch into a long run from home.  But, sandwiched between last nights 8 miler which included 30 min at tempo and tomorrows planned 5 x 3 min session, all that was on the menu for this evening was an easy 5 miles.  So I drove over to Causey Arch and in hazy sunshine and with temperatures still pushing 25C I set out alongside Tanfield Railway at an easy pace allowing time to take some photos.

The Causey Arch is the oldest surviving railway bridge in the world and when it was built between 1725 and 1726 was the longest single span bridge in the country. 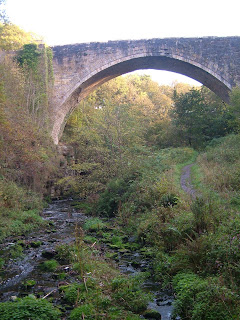 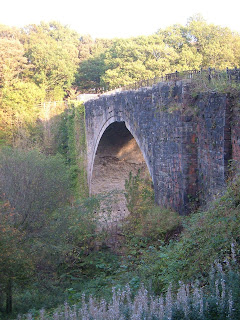 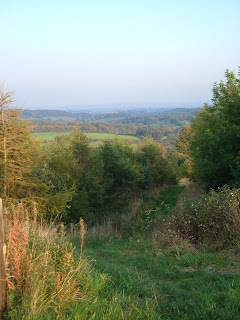 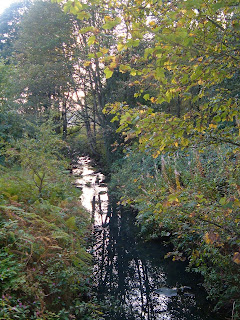 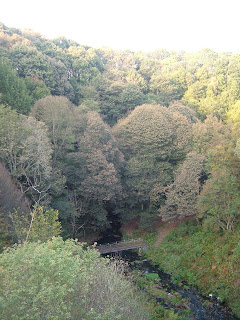 Got that ol' racing bug back again

As I have only raced 6 times between January and the end of August, 5 races in the last two and a half weeks has come as something of a shock to my body. Even though I feel that my performances are still down on what they could be, they have served their purpose - I have shown some slight improvement and as the title of this post suggests I'm getting back into racing and want more.

Having said that, following Sundays 10km at Preston I have decided, although I am not going to abandon racing altogether, what is required now is a good block of training over the next 8 weeks, with the aim of further improvement. So am looking for a target race towards the end of November, and have penciled in a 10km in Workington on the 20th.

So, last nights session was a start back to some speed work with 10 x 1 minute on 1 minute jog recovery. In unusually mild and warm conditions, as we bask in the start of this 'Indian Summer' it was an enjoyably hard session around Newburn Business Park.

Following the session I was asked if I fancied running a leg in a team bi-athlon event at Kielder, a week on Saturday - how could I resist! So with the final race in the Bunny Run series next Wednesday, that's another two races next week.

What was that plan again?
Posted by Alan Dent at 12:35 No comments:

Although pretty damp, conditions where good for running in this years Preston 10km.  Although my knees were a little tender and my legs still a little heavy from the recent races I was looking forward to today's race.
Again I opted to run without a watch and just run as I felt.

Over the first 2km I felt good and kept a steady pace but seemed to struggle a little after dropping down the steep hill into the park but was able to maintain form and although I was passed by one or two runners I was at the same time passing others.  However, just after 7km I was feeling last Sunday's and Wednesday's races in the legs and as last year found it a struggle returning up the hill out of the park. But things are improving (even if it is very slowly) as I crossed the line in 38.43 (27 seconds quicker than last year and my fastest 10km since April 2010) to finish in 28th place.

I would like to thank Francesca for being photographer for the day - she obviously knew I would be struggling up the hill. 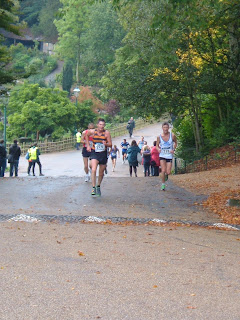 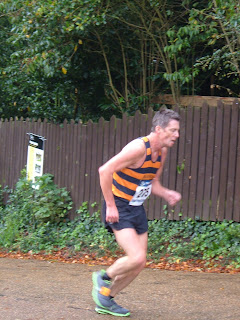 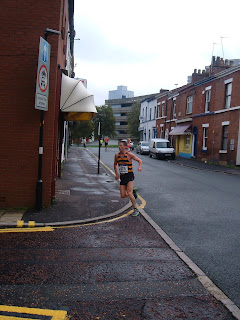 With 20 runners toeing the start line it was a  slightly larger field than race 1, two weeks ago.  Conditions were slightly worse with a stiff wind blowing across Newcastle Town Moor, and anyone who knows the Moor, will know that there is absolutely no shelter.

As the race got underway, Race No.1 winner, Jon Bell soon hit the front.  As his pace did not seem quite as quick as the last race I decided to tuck in behind him with Mike Friberg of Blaydon and Kevin Lister making up the leading group.  However, as we headed out towards the hills Jon started to pull away and I was soon passed by first Kevin and then, club mate, Mike, who forged on and soon passed Kevin also.

As we climbed the first hill I started regaining some ground on Mike and Kevin.  Cresting the hill and down the side to immediately start climbing the second hill I sensed Kevin was struggling and as we headed back down the hill and out towards Exhibition Park I cought and passed him.

Although I closed the gap slightly on Mike the gap was too much and I finished in 19.10 and third place.  the final placings being:

Direct comparrison of times with the last race are a little difficut as we ran slightly further than in the first race. Seemingly just before the start of the first race, cows had eaten some of the route markers which resulted in runners taking a slight short-cut.  But with Sundays half marathon still in my legs, the windy conditions and a slightly longer course I am looking on tonights 19.10 as compared to 19.01 a fortnight ago favourably
Posted by Alan Dent at 22:25 No comments:

Over the last 5 years I have ran the Great North Run as a chaperone for a celebrity runner - usually Nell McAndrew and again this year I was due to run with Nell.  However, as she was aiming for a pb of around 1.24/1.25 I felt that in my current form I would probably be more of a hinderance than a help and so it was with some reluctance that I declined the offer. Nell went onto record a pb of 1.25.

As a result I was given the opportunity to run without a celebrity so decided to not to wear a watch a just run as I felt and enjoy the day.  So after a quickish first mile I settled into a rhythm at what felt like 7min mile pace.  So it was a pleasant surprise when I reached 10 miles and my first opportunity to see a clock, in exactly 66 minutes.  I went onto finish in 1.26.24.  Still a long way short of what I feel I should be running but obviously I am in better shape than I thought!

The results show that I finished in 414th position and have me down as being in the 40-44 age group.  Obviously going from my youthful good looks rather than my date of birth.

At the front end the race was won in a new course record of 58.56 by Martin Mathathi with 2nd and 3rd placed Jonathan Maigo and Emmanuel Mutai also going under the hour.

On Saturday I went down to the Newcastle Quayside to watch the City Games.  This year it was a match between GB and the USA. Which the USA won 7- 3.  But, the action made for a good afternoons athletics with Mo Farah looking awesome in the 2 mile race.

Back in February I posted how I had been running for 30 years and had in that time clocked up 79105 miles.  Well this evenings 7 miles has brought, not as quickly as I hoped due to injuries etc, the total up to 80000.

I think a visit to The Miners Arms and a couple of pints of Bombardier to celebrate are the order of the day.
Posted by Alan Dent at 17:36 2 comments:

Email ThisBlogThis!Share to TwitterShare to FacebookShare to Pinterest
Labels: 80000 miles; The Miners Arms;

I knew that I was not in shape for this but could not let the year pass without one race on the track and this was my last chance and anyway a run out here would, even if I struggled, mean a faster run than a normal training run.

Of the 12 runners who toed the line in warm and blustrery conditions, numbers may have been affected by the Farringdon Cross Country meeting a few miles down the road, only 2 were seniors, still not the best of showings considering this was a championship race.

As the gun sounded a group of 3,Stew Bell, Jeff Priest and Guy Bracken moved away from the rest of the field, and as they set the pace I slogged my way around the 25 laps to the finish 8th overall and a time of 40.00.6, to give me second V50 in the VAA- NEE Championships.  First V50 in the Championships going to John Stephens of Low Fell, although first over 50 was actually Martin Farren who was running as a guest.

Last night was the first race in a 3 race series organised by All Terrain Events and held on Newcastle Town Moor.  Billed as 5km, the actual distance is 4.85Km.

Unlike the weekly 5km Parkruns which are held on the flat footpaths across the Town Moor, last nights course took you off the paths and included the two hills in the north west corner of the Moor.

With only 12 of us turning up for the race, this was certainly a low key event.  In fact, while waiting for the start, I counted more people (36) running around the Moor on training runs!!- presumably in preparation for next weeks Great North Run.

As the race got underway, in blustery conditions.  John Bell, Kevin Lister and myself immediately moved away from the rest of the field.  However, as John powered ahead and Kevin opened a gap on me, I felt uncomfortable and heavy.  In fact, I did not seem to get into my running until after the two hills as we ran past the top of Exhibition Park, about 3/4 of the way into the race.  Probably the result of a poor warm up.

The next race is on Wednesday 21st September, with the final race on October 5th, hopefully these will attract a few more entrants.

Following the race and this morning my knees are quite tender and sore but a couple of easier days should see them all-right.
Posted by Alan Dent at 12:45 No comments:

Getting back into the swing

Getting back from holiday mid-week, getting back into work and other family commitments left limited time for running or for watching the IAAF World Championships from Daegu.

I did, however, manage to get 30 miles in over last week.  Which included a 10 mile run with a fast stretch in the middle around the Rowlands Gill loop (3.15 miles).  I covered the loop in 19.37, which when compared with the 19.16 I did at the begining of August, means I have have not lost too much over the holiday period and it is now just a question of getting back into the swing of things.

I have seen very little of the World Championships on the TV and in fact only saw yesterday's 5000m final thanks to Channal 4 + 1 highlights programme.  But it was well worth waiting for, with just about the whole field in contention at the bell and Mo Farah out-kicking Bernard Lagat and Imane Merga over the last 200, it was gripping stuff!!
Posted by Alan Dent at 12:39 No comments: